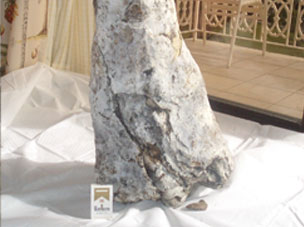 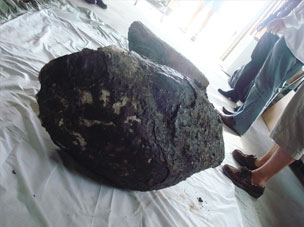 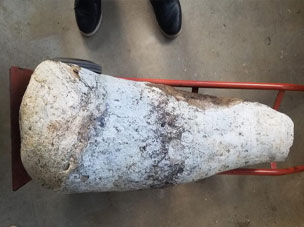 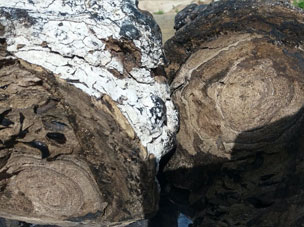 Ambergris is a pathological secretion of a very common sperm whale: the Physeter macrocephalus. It appears to be the result of stomach irritation caused by squid beaks and certain crustaceans on which the sperm whale feeds. The animal expels ambergris spontaneously.

Freshly evacuated, ambergris is generally blackish in color, solid and sticky in consistency and gives off faecal aromas. Under the combined action of seawater and air, grey amber takes on an increasingly lighter shade, from silver gray to golden yellow, and eventually turns almost white. Its smell becomes more refined and characteristic, a slightly moldy, sweet and very pleasant smell of humus.

As early as the year 1,000 BC, ambergris was known and appreciated in Africa as an elite trade item. At the same time, Chinese also knew it as 琥珀 HU PO, “scent of dragon’s drool,” which was supposed to come from dragons sleeping on rocks and drooling in the ocean.

Ambergris was well known to ancient Egyptians who used it as incense. In the tenth century, an Arab merchant named Ibn Hawqal, considered it as valuable as gold and lent it aphrodisiac properties.

In the Middle East as in Rome, ambergris was used in the manufacture of perfumes and in the recipes of various pharmacopoeias. In Asia, ambergris was used as a spice for cooking. The Turks regarded it as the most pleasant of the offerings and carried it along for the pilgrimage of their life in Mecca. The name of the ambergris comes from Arabic "Anbar".

Please note: do not confuse it with yellow amber, a fossilized resin from 40 million year old trees, whose trade was flourishing in Antiquity and still is today.

- The bark "Splendid of Dunedin" found a piece of ambergris weighing 983 pounds and was estimated to be worth $25,000 which was located in New Zealand in 1883.

- On December 24th, 1908, a block of ambergris weighing 1,003 pounds, the largest ever found, was reported by whalers from Larvik, Norway.

- Another block, weighing 926 pounds, was found in the Antarctic by the whaling ship "Southern Harvester" in 1953.

- The Spanish whaling station of Getares found a sperm whale with a piece of ambergris of 304 pounds in 1927, which was sold to the Norwegians, owners of the only whaling company of the Falkland Islands, for 400,000 crowns, price considered at the time as outrageous (it is not mentioned if it was too much or not expensive enough).

The musky and animal notes mingle with the scent of autumn leaves and blond tobacco from which are exhaled, in the background, the accents of aldehyde undergrowth and floral ketones. The main component of ambergris is ambrein which under the combined action of the sun, air and sea water transforms it into this suave and captivating substance, so characteristic of a high quality ambergris.

Used in traces, in the form of an infusion in alcoholic perfumery, it usually serves to fix and exalt very delicate and/or fleeting perfumes. It's too expensive to be used in soaps. The perfumery guide, Poucher’s perfumes, cosmetics and soaps (1923) classifies ambergris into several qualities and types, specifying that it brings a certain velvety to refined "high-end" perfumes. It is a very good fixator of floral scents and its persistence on a smelling strip can last several months.

The trade of ambergris is legal in most countries. It is a "waste" which, obtained without handling the animal, is not subject to CITES.

Translation of the word Ambergris:


The author of this text is Mr Michel DAUPHIN